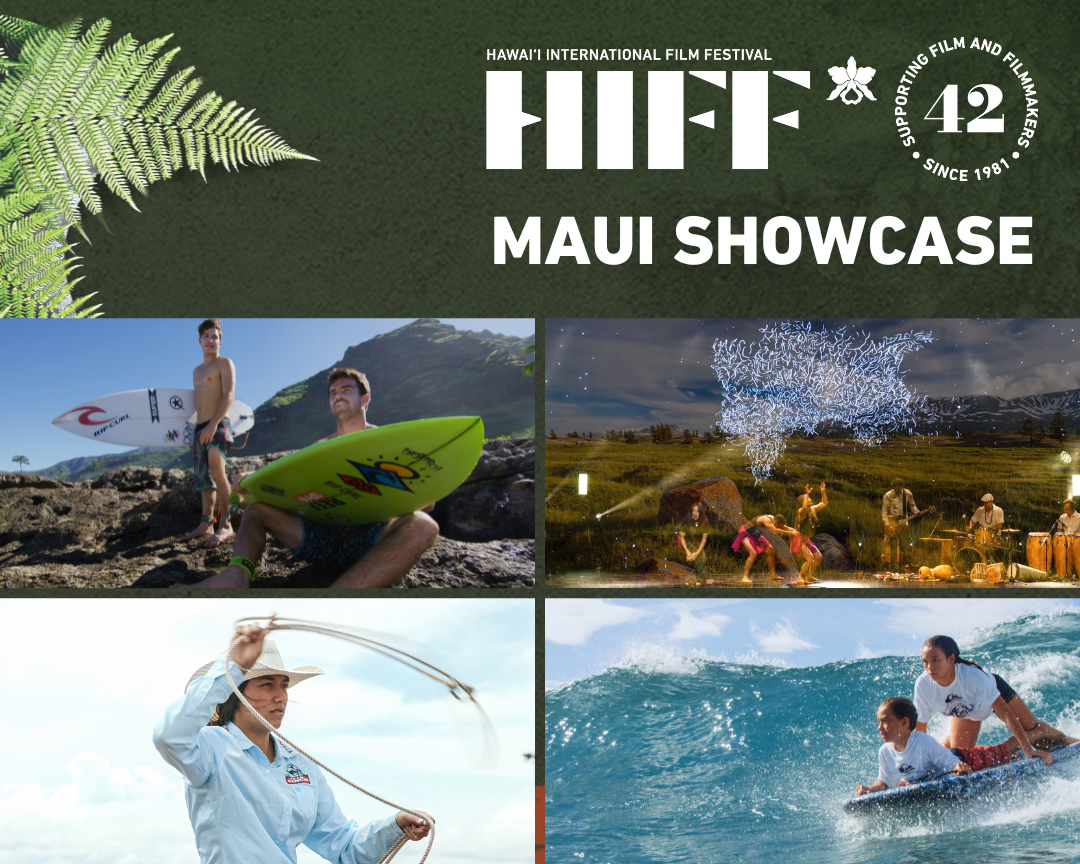 Filled with insight and discovery, HIFF is dedicated to advancing understanding and cultural exchange among the peoples of Asia, the Pacific and North America by presenting films from around the world. Each year, more than 50,000 attendees throughout Hawai‘i experience the sounds and images of filmmaking from approximately 45 countries. This cultural exchange of ideas, presented through the powerful medium of film, raises the awareness of our similarities and differences alike.

THROUGH THE DOGGY DOOR | 7:00 PM | 90 minutes | English
Through the Doggy Door revolves around the story of Sheldon Paishon, a talented surfer who was born and raised on the rugged shores of Oahu’s Westside. Far from an idyllic Hawaiian paradise, the community has been ravaged by drugs, poverty and the long reverberations of colonialism. At the age of 12, Sheldon’s parents lost their house and the family was homeless, living out of a tent for the remainder of Sheldon’s adolescence. With a deep drive to overcome all odds and live out his dream of professional surfing, Sheldon battles through the harsh realities of being homeless. Eventually he is taken under the wing of popular pro surfer Mason Ho, who recognizes his immense talent and helps guide him through a world he’s seen very little of.

This film aims to inspire and ignite a deeper conversation about the realities of homelessness, the struggle of poverty in Hawai‘i and the importance of self-belief and will power.
CLICK HERE for the trailer

MY SMALL LAND | 2:00 PM | 114 minutes | Japanese, Kurdish, Turkish (English subtitled)
Sarya has lived in Japan since she was five. She pretends to be German to her friends, which is easier than telling the truth. In reality, Sarya’s parents are Kurds who traveled from Turkey to Japan as refugees. Furthermore, she is responsible for her younger siblings while her father is at work. Despite the hardships, the future seems bright and soon, Sarya will be attending college. A tender relationship develops with her work colleague Sota, and her own feelings begin to surface. All Sarya wants is a completely normal life. However, when her father’s application for asylum is denied, she is increasingly torn apart. A truly haunting film about the balancing act of a young refugee who is searching for her own world while caught between two other ones.

My Small Land, the debut directorial debut of Emma Kawawada, a mentee of celebrated Japanese auteur Hirokazu Kore-eda (Nobody Knows, Shoplifters), is a nuanced film that explores issues of xenophobia and the impenetrable immigrations laws of Japan, while at the same time telling a heartfelt story about the ups and downs of coming of age, falling in love, and finding yourself.
CLICK HERE for the trailer

MALAMA AINA SHORTS PROGRAM | 4:30 PM | total run time of 100 minutes | English language
HIFF Presents a Selection of environmentally focused shorts from Hawai‘i, focusing on environmental stewardship right here at home. All of these shorts will also screen online as part of the Green Screen Shorts Competition program and will be eligible for the Deep Blue Environmental Shorts Award presented by the U.S. Department of Energy’s Water Power Technologies Office.

HEART OF MAUI | 7 mins
Director: David Ehrenberg
Biologists Erika Kekiwi and Chris Warren work to save rare and endemic forest birds in Haleakalā National Park, showing what would be lost if humans fail to act and stop this extinction event. A National Park Service film.

KUMU NIU | 15 mins
Director: Alex Cantatore
The island of O’ahu is covered with coconut palms, but for fear of liability the vast majority of these sacred trees have been stripped of coconuts. The grassroots movement, Niu Now, is on a mission to restore the “niu,” or coconut, as a fundamental food crop in Hawai’i and to spread the Indigenous wisdom of “aloha ‘āina:” loving land and serving people.

NĀ KAMA KAI – CHILDREN OF THE OCEAN | 36 mins
Director: Ju Martins
A non-profit’s mission to empower youth through ocean-based education, with the goal of cultivating environmental stewardship and building future community leaders. While traveling to Brazil for their first international clinic, participants quickly realize the many ways the ocean connects us rather than divides us.

OLA KA HONUA | 22 mins | 22 mins
Director: Jilli Rose
For the past 25 years, thousands of Maui’s residents and visitors have come to volunteer at Auwahi, a storied forest on the leeward side of Haleakalā volcano. By their efforts, Auwahi has gone from being a “museum forest,” a handful of centuries-old ancestor trees in a cow pasture, to a vibrant young forest where a critical part of Hawai’i’s biota has sanctuary.

THE STORY OF EVERYTHING | 7:30 PM | 105 mins | English
The Story Of Everything, a theater performance written and conceived by Hawai’i Poet Laureate Kealoha, and now a film produced and directed by Engaging the Senses Foundation, illuminates the intersection between science, the environment, the arts, and mindfulness. The film explores humanity’s rich and diverse explanations for the origins of life, and presents powerful solutions for the continued health of the planet and all beings on it.

In an era when we face the knowledge that racism consistently exposes people of color to reduced quality of life, and that the world itself is in peril due to climate change, a project focused on light, on solutions, and on the transmission of hope is a cause for celebration. The Story Of Everything incorporates poetry, dance, music, art and special effects to condense 13.7 billion years into an hour and 45 minutes that asks and answers two questions challenging humans from the very beginning: “Where do we come from?” And even more important: “Where can we go next?”

TICKETS: $12 per film (plus applicable fees)


ALL TICKET SALES ARE ONLINE ONLY